The First National Bank of Ottawa

The First National Bank of Ottawa has marked over 150 years of innovation, bold initiative, and community leadership as an independent community bank. The following provides an overview of some historic highlights and insight into the traditions that have served us well, both as an integral partner in the development of our communities and as precursors of our current stature and commitment to customer service and responsiveness.

We honor our rich history and acknowledge our significance in the prominence and influence that is apparent today. A ledger with The First National Bank of Ottawa’s first entry the day the bank began business, June 1, 1865, is displayed for customers and visitors in the main bank lobby.

The First National Bank of Ottawa has never defaulted on any demand made on it, not insignificant through the events of its long history, which include the panics of 1873, 1893, the financial crisis of 1929 – 1932 and the mortgage crisis of 2007 – 2008. In 1931 Illinois Governor Henry Horner issued an emergency proclamation closing the banks in Illinois. The First National Bank, as a national institution refused to comply. The farsighted and innovative officials of the bank foresaw the incoming crisis, keeping the bank extremely liquid, and advised depositors that they had $1,000,000.00 available at the tellers’ windows, helping avert any crisis of confidence or run on the bank by depositors. The bank is purported to be the only bank in LaSalle County that survived the Great Depression.

During the winter of 1864 – 1865, a number of local businessmen, aware of banking reform taking place throughout the country met to discuss the possibility of a national bank for the community. At the time, 638 national banks had been organized under the National Currency Act of 1863 and the National 1922-Bank Act of 1864. In January 1865, subscription books to raise capital for the bank were opened and subsequently about 50 residents raised the required $100,000. Freeman Clarke, the Comptroller of the Currency issued a charter to The First National Bank of Ottawa in May 1865. A private bank on the corner of Main and LaSalle Street, owed by W. H. Cushman was purchased and The First National Bank of Ottawa opened for business June 1, 1865. William Hickling became the President and W. H. Cushman was cashier. Cushman was married to the former Anna C. Rodney who had been a bridesmaid in Abraham Lincoln’s wedding in 1842.

President Lincoln was identified with the early history of the bank both personally and in his capacity of Chief Executive of the United States. His first documented visit to the community was in 1858 for the first of the now famous Lincoln-Douglas debates with political opponent Stephen Douglas.

There is a brief record of financial dealings between Lincoln and Richard Thorne, who was a director of the bank from 1865 to 1867. In 1856 Lincoln wrote to Thorne concerning campaign expenses:

“some little expense bills are on me, and I have concluded to draw on you for $20 now, which is ten dollars within the authority you gave me.”

Significant historical events involving Lincoln occurred during the same period that the bank was first being established. In January 1865 while Lincoln was meeting with Jefferson Davis to discuss peace negotiations to end the war, the founding shareholders were organizing the bank. In May, approximately one month after the surrender of the Confederacy and the assassination of the President, the bank’s charter was being issued.

In 1904, the bank moved to its present location at 701 LaSalle Street and expanded to double the size of its only facility in 1907. The 1921 expansion included two store buildings to the west behind LaSalle Street. Upon completion of the 1940 remodel and expansion, a 32 page special edition of the Ottawa Republican Times documented every item, from the 85 gallons of paint used on the walls, to the 135 tons of concrete in the new vault. One of the State’s first drive-through facilities was opened in a remodeled portion of the main building on August 30, 1954. Touted as the newest innovation for those ‘on the move’, this precursor to the modern drive-up bank served 1300 in the first 11 days, and 2799 in the first four weeks. Advertisements from that year invited businessmen to bank from the safety of their cars, farmers to save time by driving through, and parents to bank hassle-free from the convenience of their car with the whole family onboard.

Three more branches in the Ottawa area were added between 1976 and 1988. The most recent remodeling and expansion of the main lobby was completed in 2002. This remodeling gave the façade a look reminiscent of the original building. Expansion continued in 2003 when a branch was built in Morris, Illinois and two branches were acquired in Streator, Illinois from First Midwest Bank.  May 11, 2005, was the grand opening of the newest full service branch located in Yorkville, Illinois.  In early 2018, The First National Bank of Ottawa added a loan production office in Maple Park, Illinois.

In 2014 we announced our strategy to significantly increase the profitability of our bank and then grow the assets of the bank in a disciplined and dramatic way.  We insisted that this strategy be more than simply words but rather a mandate to maintain our independence and enhance total shareholder value.  From 2014 to 2018 the profits of the bank grew from $1.28 per share to $5.68 per share as a result of the talent and effort of our amazing staff.  Our performance was so good, in fact, that American Banker® magazine recognized us in the Top 200 Community Banks in the United States under $2 Billion in assets, ranked by their 3-year average ROAE.  We are very proud that First Ottawa Bancshares not only made the list for the first time in our history but ranked 98th out of the 633 eligible banks and second amongst Illinois banks.  The accomplishment is more remarkable when we consider the average asset size of the Top 200 Banks is almost 3 times that of our bank.

Disciplined and dramatic growth would require talented personnel and CAPITAL investment.  During the fourth quarter of 2018, we completed a significant step in fulfilling the second part of our strategy with the investment of $10 million by two of the most talented and respected bankers in Chicagoland – Dan Miller and Joe Chiariello.  Their investment and addition to our Board of Directors was noteworthy enough that Crain’s Chicago Business published an article about us in their December 3, 2018 edition.

In the first quarter of 2019 we were approved by the OCC to open a full-service branch at the building we purchased in 2018 at 4733 Main Street in Lisle, IL.  After remodeling and modernizing the building we opened the branch in September of 2019 doing business as American Commercial Bank & Trust.

During the second quarter of 2019 we leased a suite on the main floor of the 1475 Building in the Schaumburg Corporate Center.  This facility became our second permanent location as part of our American Commercial Bank & Trust (ACB&T) expansion.  Not coincidentally, this branch is not far from the first branch location of the former American Chartered Bank (ACB) which was founded by our Bank Chairman Dan Miller.  In August of 2021 we opened our third branch in Chicago at 1315 N. North Branch Street, on Goose Island to better serve our downtown Chicago clients.

On September 17th of 2021 we officially changed the name of the bank to American Commercial Bank & Trust, NA.  We made this momentous decision because our name no longer
reflected the majority of our clients, strategic growth initiatives, business relationships and employees.  In Ottawa we continue to do business as The First National Bank of Ottawa, but now as a Division of American Commercial Bank & Trust.

While maintaining and developing a stable partnership with its communities, fulfilling an instrumental and essential role through growth and stability, American Commercial Bank & Trust continues to innovate and provide the most current products and services to our clients. 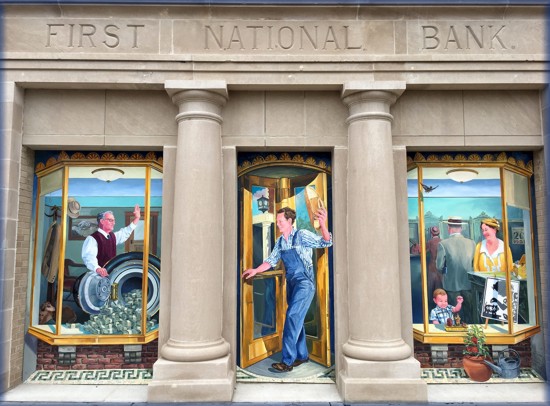 Following the stock market crash of 1929, Americans panicked and rushed to their local banks to withdraw their money. The result was that 5,755 banks closed between 1930 and 1932.  The closings had a domino effect, leading to business failures, lost jobs and lost homes.  The only surviving Ottawa bank, with more than $4 million on deposit and $1 million in cash, The First National Bank of Ottawa staved off depositor jitters by daily displaying an open vault with cash spilling out of it into a sill in its front window on LaSalle Street.